END_OF_DOCUMENT_TOKEN_TO_BE_REPLACED

New evidence now indicates retaliation was a possible motive behind the shooting death that landed Cleve Heidelberg in prison for the past 45 years.

Heidelberg’s attorneys have conducted interviews that seem to confirm the case may actually involve two separate shooting deaths that occurred nearly half a century ago. Five months and 170 miles separate the two shootings. 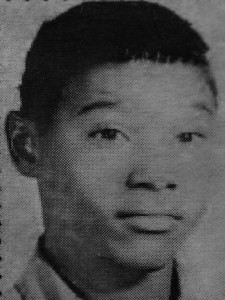 Peorian Mark Clark was shot and killed Dec. 4, 1969, in Chicago in a police raid on the headquarters of the Black Panther Party. Peoria County Sheriff’s Sgt. Ray Espinoza was shot and killed May 26, 1970 outside the Bellevue Drive-in movie theater in Peoria.

Clark was 22 years old when he was killed. He was a member of the local chapter of the N.A.A.C.P. and had joined the Black Panther Party enthused about the party’s 10-point program asserting civil rights, education, justice and peace.

Heidelberg, an African-American man, could have been walking on the wrong street at the wrong time with no involvement in either shooting, his attorneys now believe.

According to a statement made by Matt Clark, his brother James Clark, who confessed to shooting Espinoza, told him he shot and killed the white sheriff’s deputy in Peoria in retaliation for white officers shooting and killing their younger brother Mark in Chicago.

James Clark confessed to the murder of Espinoza in 1970 but only recently did his brother Matt confirm retaliation was the motive.

Heidelberg has always maintained his innocence. No physical evidence confirms he was the shooter.

Although James Clark had confessed to the murder in 1970, records obtained by attorney Andrew Hale show the state’s attorney at the time and the judge, Charles Iben, decided the confession did not constitute grounds for re-examining the case. 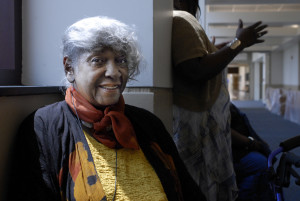 Mae Winston, 77, sits outside the courtroom waiting for July 28 hearing to review murder conviction of her brother Cleve Heidelberg. She was in court again for his hearing Sept. 22, but her health is declining.

“Our concern at this time would be to protect the trial record,” the state’s attorney wrote in 1970.

James Clark died in 2015. His older brother Matt recently told Heidelberg’s attorneys that James had confessed to him that he shot Espinoza stating

“I got one of the (expletive) for Mark.”

The case has been wending its way through the Peoria County Circuit court since then.

Heidelberg seeks to represent himself

In a surprise move during a hearing Sept. 22, Cleve Heidelberg told Peoria County Court Judge Albert Purham he wants to dismiss his attorneys and represent himself.

He was prepared to waive appointment of a special prosecutor and represent himself seeking immediate release.

The move took his attorneys, Andy Hale and Don Jackson, by surprise.

Heidelberg was frustrated by the increasing complexity of motions in the case. He told the judge he was not prepared to spend additional years in prison while the case worked its way through the court.

Hale asked for a recess. He told the judge he loves Heidelberg too much to “let this train crash. The stakes are too high.”

However, even after consulting during a recess, Heidelberg still wanted to represent himself.

Purham set another hearing for Oct. 5, telling Heidelberg he has two weeks to discuss his decision with his attorneys. Purham warned Heidelberg that if his decision to represent himself remains unchanged, he should be prepared to start arguments immediately at that time.

“I have been ready these past 46 years,” Heidelberg told the judge.

In a surprise request at the close of the hearing, Hale asked the judge if Heidelberg’s sister, Mae Winston, 77, could talk briefly with her brother. She was in the courtroom. She is in poor health, has not been able to travel and has not seen her brother for more than a decade. During her brother’s decades in prison, she sent him spending money every month. She has never doubted his innocence.

The judge cleared the courtroom and allowed 15 minutes for that meeting.

Afterward, Hale said it was an emotional reunion with lots of tears.

“This has been a very difficult 45 years for Mr. Heidelberg. He’s 73 and in poor health. He’s frustrated, anxious and impatient,” Hale said. “I understand where he’s coming from.”

(To follow updates as they occur, go to the “CW Notes” section of the newspaper at www.TheCommunityWord.com.)