END_OF_DOCUMENT_TOKEN_TO_BE_REPLACED

Donald Hey and Bud Grieves are focused on re-establishing the ancient “flood pulse” of rivers. 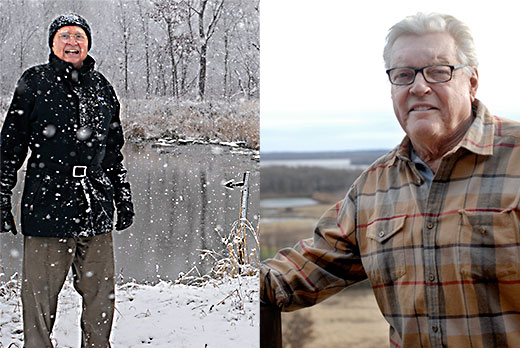 (left) Donald Hey hiked into his wetland to point out the riffle work he had constructed in the Des Plaines River in the background. (right) Bud Grieves can stand on his deck and observe his restored wetland stretching to the horizon.

The flood pulse is the lifeblood of rivers, the ebb and flow of seasonal cycles of gentle floods and droughts established over millennia. Human development has strangled this cycle. Rivers are now restricted, choked, narrowed and gagged into submission, rendering them and their nearby floodplain wetlands among the most threatened ecosystems in the world.

Enter these two men: an environmental engineer and an investment advisor.

Hey, director of Wetlands Research in Wadsworth, said the Illinois River is now reduced to little more than a drainage ditch for urban and agriculture runoff and a channel for barge traffic.

Yet, the restoration sites overseen by both Hey and Grieves are far from drainage ditches. These projects are aesthetically gorgeous. The work has enormous, quantifiable economic and environmental value. Their work reduces the frequency and severity of flooding.

Peoria spent more than $750,000 in 2015 for two months of sandbagging during a flood. Hey spent $350,000 for riffle work along the Des Plaines River that will result in benefits over decades.

He recently completed a 60-acre restoration project along the Des Plaines River on land given to Wetlands Research. He designed a riffle system using large rocks to build stone steps in the river. The $350,000 cost includes design, permitting and construction. These steps or riffles control 200 square miles of watershed and raise the water level over 6 feet. After 18 months, a 13-mile section of the once muddy Des Plaines River became clear. Eliminating turbidity has allowed native fish, notably bowfin, to visually see prey. That has enabled the bowfin to see and eat invasive carp.

Water flowing into the wetland can be measured for pollutants and nitrogen. Water flowing out of the wetland is again measured and reduction of pollution is calibrated. Hey would like an economic value put on that pollution reduction, and he’d like landowners to be able to sell the nitrogen they remove from the water. Filtering and removing nitrogen in the wetland means less nitrogen downstream contributing to the dead zone in the Gulf of Mexico.

He envisions this system widely adopted throughout Illinois, Iowa, Missouri, Wisconsin and Minnesota, creating a network of wetlands he calls the Riverine National Park system.

Hey is looking for sites in the Peoria area, perhaps along the Spoon River, to recreate this filtering, cleansing wetland system.

A different approach, similar outcome, has been evolving south of Banner Marsh for the past two decades under the vision of Bud Grieves, former mayor of Peoria and investment advisor. Grieves grew up along the Illinois River in Lacon hunting, fishing and boating. When he was in high school, he and a friend traveled from their home in Lacon to New Orleans in a small motorboat.

“I’m on the land all the time and know which way the water flows,” said Grieves, now in his 70s.

In the 1990s, he bought land South of Banner Marsh on the west side of the Illinois River. He built a dam, developed a series of lakes, planted 8,000 trees and created a model for wetland restoration.

Big Lake is a 7-acre body of water on his property that drains runoff from 1,000 acres to the west. Just a few inches of rain once sent water rushing through the property roaring like a train at full throttle and threatening to wash out a bridge on Illinois Route 24. Now Big Lake slows down the flow, raises the water level and controls runoff.

Grieves has seven lakes on about 250 acres of land. He can control water levels to mimic what was once the natural flood pulse of the river. Before manmade systems of control, the spring rains meant huge volumes of water would flood over the banks inundating backwater wetlands. By July, backwaters would dry out and the moist soil would host grasses and deep-rooted perennials loved by migratory waterfowl.

Grieves can mimic that system so his wetlands retain water that otherwise would result in flooding downriver from his property.

“This is aesthetically beautiful and could be an economic model. Some people don’t care if the river is clear, but they care about the pocketbook issues of flooding,” he said. “Flooding is getting worse. We need to start thinking differently about these issues. We could explore programs like the CCC to give people a living wage” in exchange for the labor to restore wetlands.

On the heels of the 100-year anniversary of the National Park system, Hey is proposing his Riverine National Park system and Grieves wants to encourage creative thinking to financially incentivize more wetland restoration. And Peoria is now just months away from spring rains and nearly annual river flooding.