END_OF_DOCUMENT_TOKEN_TO_BE_REPLACED

“Data takes the emotion out.” The Rev. Marvin Hightower, president of the Peoria Chapter of the NAACP, said that in an article in the March issue of Community Word about clean syringe exchange programs.

There are 90 supervised locations around the world where people can go to inject street drugs under trained supervision. There is just one location in the United States operated below the radar by a not-for-profit.

Here are some facts:

We all hail naloxone for saving lives after an overdose, but the fact is most people shoot up alone. And they die alone.

Street drugs have an unknown provenance with unknown potency and toxicity — making overdoses an ever-present possibility. The Centers for Disease Control and Prevention just released data showing that emergency room admissions in the Midwest for drug overdoses shot up 50 percent last year from the previous year. Many people never make it to the emergency room.

Safe injection sites have trained staff, clean syringes, a supply of naloxone to prevent overdose deaths and available counseling for long-term rehab. People bring their own drugs. Research has tabulated that millions of injections have been self-administered in these locations and not one overdose death occurred.

The majority of the 64,000 people who died of opioid and other drug overdoses in the United States in 2016 were alone, with no trained supervision and no one skilled at administering naloxone. Final tabulation of the deaths in 2017 will likely be even higher. These deaths mark a sharp rise from about 17,000 in 1999.

Safe injection sites are sometimes referred to as bridges to treatment. The goal is to keep people safe and alive while they are deciding to enter treatment. These sites not only save lives, they also reduce the medical costs of treating people with HIV and hepatitis C spread by sharing dirty needles.

Critics also contend these sites condone illegal activity because street drugs are illegal contraband and purchasing them breaks the law. But seatbelts don’t condone speeding, yet they help keep us safer when we do speed.

Acquiring drugs and using drugs are both illegal. Separate the two issues and solve the second problem first. Fact is, we’ve tried the reverse order and failed. We’ve tried criminalization, and that does not work.

Past approaches to this problem have failed, are failing and will continue to fail. Now it’s time to separate emotion from facts and try a new, proven approach: safe injection sites.

Now separate fact from emotion: if your child or parent had an opioid drug problem, would you like to reduce the risk they die alone, possibly following the last argument you had with them over drugs? 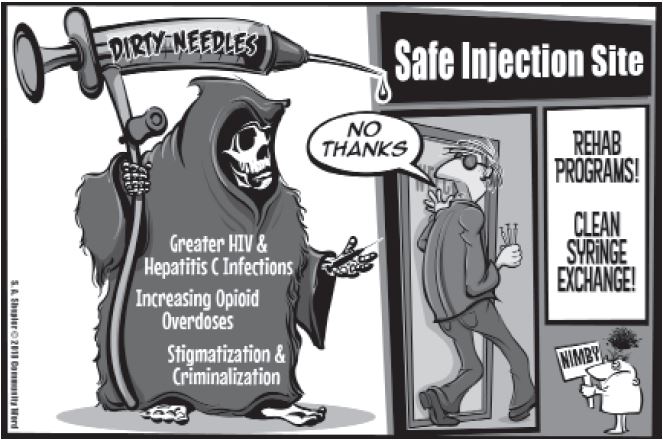