END_OF_DOCUMENT_TOKEN_TO_BE_REPLACED

Editor’s Note: Cleve Heidelberg was found dead in his apartment Saturday morning March 24. He was released from prison 10 months ago after spending 47 years behind bars for a crime he always insisted he did not commit.

In a case riddled with problems and clouded by racial issues, procedural hurdles are being used to delay and deny justice for Cleve Heidelberg, said attorney Celeste Stack who assisted with the Heidelberg case and recently opened an office in Peoria.

She is working with Chicago attorney Andy Hale who resurrected the Heidelberg case after nearly five decades.

Heidelberg spent 47 years in prison before being released in May 2017. He had been sentenced to 99 to 175 years for the shooting death of Peoria County Sheriff’s Deputy Ray Espinoza. The Peoria County State’s Attorney’s office has appealed his release and appealed the defense counsels’ petition to submit new evidence that would prove innocence.

“This case is one of the worst miscarriages of justice I’ve ever seen. It’s heartbreaking. Gives me a pit in my stomach,” Stack said.

She and Hale want to investigate other wrongful conviction cases that have been adjudicated in Peoria over the years.

Peoria attorney Don Jackson, co-counsel for the Heidelberg defense, recently said he suspects there are hundreds of wrongful convictions over the years that passed through Peoria County courts.

After three decades with the Cook County State’s Attorney’s Office, Stack said it’s almost an automatic response for prosecutors to deny a petition of wrongful conviction.

“People would come to our office with the goal of a new trial and a defense of innocence,” she said. “The state almost always responds ‘You’re lying.’”

She recalled one of her first wrongful conviction cases as a young prosecutor. The man had already been in prison for more than 12 years for raping a young girl, yet he consistently claimed his innocence. When DNA evidence became available, he petitioned for a DNA test, and Stack prevailed in allowing the test despite resistance.

She said when the test was finally authorized and she was present, watching the prisoner extend his arm for the syringe to take blood, it was an epiphany moment.

“He was so thrilled his blood was finally being taken,” she said. “I got chills when I thought ‘could he really be innocent?’ That was the first time I started questioning.”

He’d been in prison for more than a decade at that point, and the DNA test proved he was innocent. Stack started pondering how many others are wrongfully convicted.

She wrote a successful grant application that was used to establish a judicial integrity unit in Cook County. Then she supervised the unit and litigated 1,000 post-conviction petitions.

“Cleve’s case is a laundry list of every wrong thing and misconduct,” she said. “Prosecutors must be independent from the police. Very important.”

She has now teamed up with Andy Hale, opening an office in Peoria to handle cases involving miscarriage of justice.

“We’re available to look at cases,” she said.

With this Peoria office, “Andy and I are acting like a conviction integrity unit,” she said, citing the media as a “powerful factor in getting wrongful conviction cases noticed and dismissed.”

Stack can be reached at cstack@AHale.com.

She is keynote speaker at the 57th annual Peoria ACLU banquet May 10 at the Illinois Valley Yacht Club, 5102 Galena Road. For more information go to www.ACLUpeoria.org. 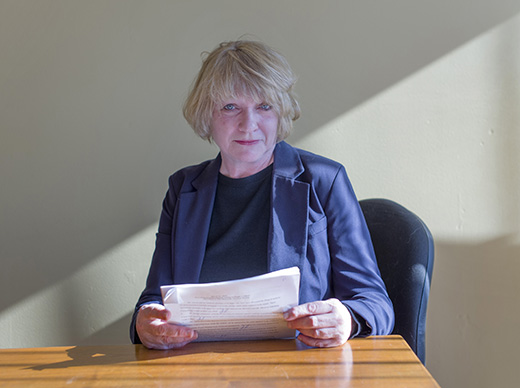 Celeste Stack is an attorney working on civil rights violations and wrongful convictions. She assisted with the Cleve Heidelberg case.