Trust is in short supply in America today. Our trust has been betrayed historically dating back to the founding of the country and betrayed recently by government policies that do not serve the best interest of all Americans. Now we…

END_OF_DOCUMENT_TOKEN_TO_BE_REPLACED 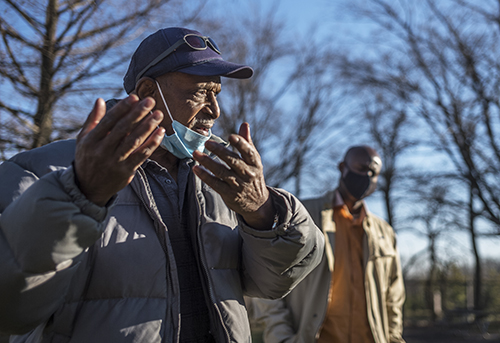 Lester Mason, left, gestures as he discusses his release after a lifetime prison sentence. Jennifer Soble, executive director of the Illinois Prison Project, calls the sentencing “a serious, egregious injustice” under a law that is “almost exclusively applied to Black men.” (PHOTO BY DAVID ZALAZNIK FOR COMMUNITY WORD)

Lester Mason is the victim of what many now consider an ill-conceived and racist “three strikes and you’re out law” that almost exclusively targets Black men.

He was released from prison the day before Thanksgiving after an incarceration of nearly four decades. On his first day as a free man, he visited his mother’s grave at Springdale Cemetery.

Mason, 76, remembers his shock, turning to look at his mother in a Peoria courtroom in 1982 when he was sentenced to natural life in prison with no chance for parole.

“Mama, did you hear that!” he had said in disbelief.

Under sentencing guidelines, the judge had no discretion. Mason began a life sentence. Years later, even though his sisters had assured the state they would pay any costs if their brother could attend their mother’s funeral, that request was denied.

Eight days after his release, he smiled in the pale winter sun, tension drained from his face, and he enjoyed children shouting in a distant playground. It was a happy sound he hadn’t heard in years.

As COVID-19 and Legionnaires Disease sweep through prisons nationwide, facilities are often put in lockdown. Mason and others at Pontiac Correctional Center were confined to their cells 24 hours a day except for showers.

Mason was the first person in Peoria County convicted of life in prison under the law, but technically it should not have applied to him. He has had almost four decades to reflect on this process.

Although he pleaded guilty to three armed offenses, he was armed in one incident, not three, he said. However, before three-strikes was enacted, Mason had been convinced to plead guilty to avoid a lengthy court process. That advice backfired tragically when the three-strikes law was applied retroactively in his case.

The law varies from state to state but essentially removes discretion from judges and requires a natural life sentence for offenders with three convictions for serious violent felonies or drug trafficking. The law has been used to justify life convictions that would never occur today and often should not have been applied even years ago.

Jennifer Soble, founder and executive director of the Illinois Prison Project, wrote a petition on behalf of Mason and sent it to Gov. JB Pritzker. The governor reviewed the petition and signed it.

Mason recalled he’d been watching MSNBC on television when a guard approached and told him he was being released.

“Released to where? Released from what?” he recalled thinking. He stood up and felt a strange lightness.

His nephew and assistant school principal Darrell Jackson was at the prison to drive Mason home to Peoria.

Soble said, “I have 150 clients in for natural life for armed robbery or drugs and almost all are Black. All had been told to take a guilty plea and not challenge. At that point, the judge has no choice.”

Some states have already revised the three strikes legislation. In Illinois, Rep. Rita Mayfield, D-Waukegan, has legislation to allow those convicted as “habitual criminals” under three strikes to be considered for parole.

Rep. Mayfield said in a statement, “Giving a natural life sentence without possibility of parole to an individual simply because they have repeat offended is an injustice and denies that individual an opportunity to avail themselves of drug programs or other rehabilitation programs available.

“How can we justify putting someone away for life for multiple thefts or DUI’s but murders and rapists are released back into society? This law really needs to be repealed and those individuals convicted under the law should be allowed to go before the parole board and have the opportunity to prove they are not the same person they were when last convicted.

“We are wasting tax dollars keeping these individuals locked up for life as well as denying them an opportunity to be contributing tax-paying citizens.”

Peoria attorney Christopher McCall would also like to see changes in the legislation. He said in a statement: “The problem with the three-strikes law is judges are forced to adhere more to the emotionality of convictions rather than a thoughtful analysis as to whether the facts of the case meet the necessity of the statutory punishment.

Judges have often sat through the trial, reviewed the criminal background of the defendant, desires of the victim(s) and advocacy of the counsel. Judges are in a better position to determine just punishment for the individual case rather than legislatures after hearing the aforementioned histrionics.”

Soble said there are hundreds now in prison for natural life and thousands more were sentenced to 50 years which is, in effect, natural life for older inmates.

“This is a serious, egregious injustice our state inflicted on the minority community,” she said.

As our understanding of crime has evolved, most of these incarcerated people would likely not be sentenced to life in prison today, according to Soble. We now understand the power of redemption, the way elderly people age out of crime, the way this sentencing is almost exclusively applied to Black men and the injustice of convincing people to plead guilty.

Mason follows politics closely. He has never voted in his life and is anxious to register and help others register as well.

“I want to stay healthy, fit into society and find employment. I have no technological skills, but I have people skills,” he said.

His nephew laughed in agreement and pointed out his uncle has to remember to hang up the cell phone. Mason turns 77 on Feb. 6.

“Everyone is invited to this birthday party!” he said.

Just one year ago, Soble was operating the Illinois Prison Project with no paid staff. She and two volunteers handled all the cases. Now she has one office employee. Of her 150 clients, she’s been successful in securing releases for 31 people and 18 of them had been sentenced under circumstances like Mason’s.

“We’ve been fortunate we’ve gotten a number of folks out. Lester’s case is heartbreaking but not uncommon,” she said. “Lester’s incarceration did nothing to make us safer, but it reflects our racist, ingrained policies. It’s shameful for all of us. I’m sort of ashamed I operate within this system I’m trying to correct.”

Soble was a public defender before starting the Illinois Prison Project.

“These are uphill battles but hopeless cases are my wheelhouse,” she said, acknowledging that a number of people advised her against trying to start the Illinois Prison Project.

“I wasn’t sure it would work, but I knew I had to try. Every success, like Lester’s, gives me the fuel to keep going. It is validation to see Lester,” said Soble who runs the nonprofit out of offices in Chicago. Access its website at www.illinoisprisonproject.org. Donations can be mailed to: Illinois Prison Project, 53 W. Jackson, Suite 1056, Chicago, IL 60604. 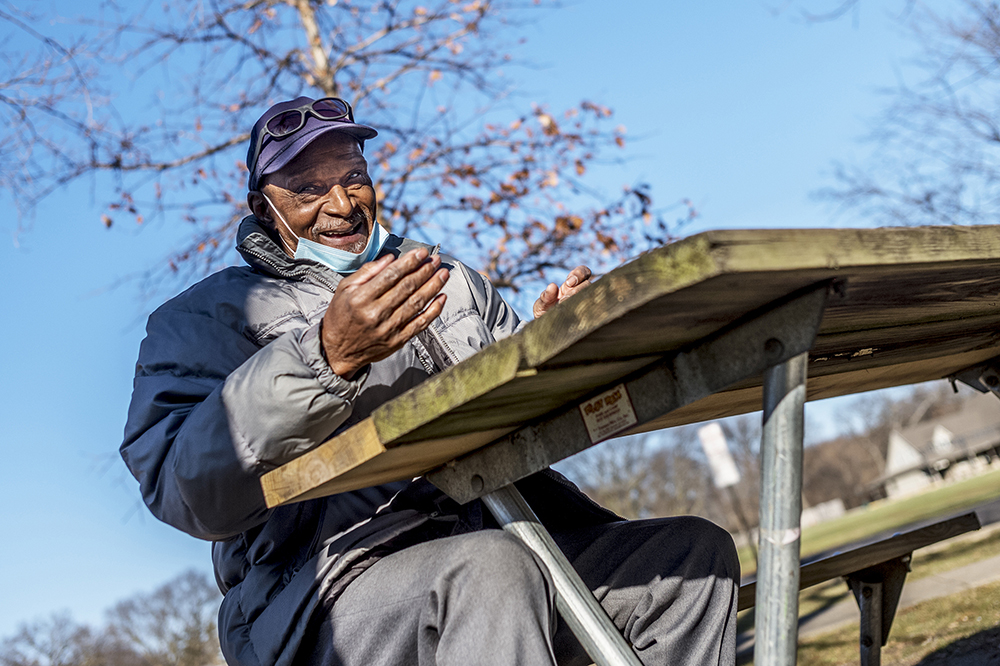 Lester Mason enjoys a sunny afternoon in Glen Oak Park. In 1982, he had been sentenced to natural life in prison with no chance for parole. After an incarceration of nearly four decades, the Illinois Prison Project successfully petitioned for his release. His story illustrates that prosecutorial justice is not always true justice. (PHOTO BY DAVID ZALAZNIK FOR COMMUNITY WORD) 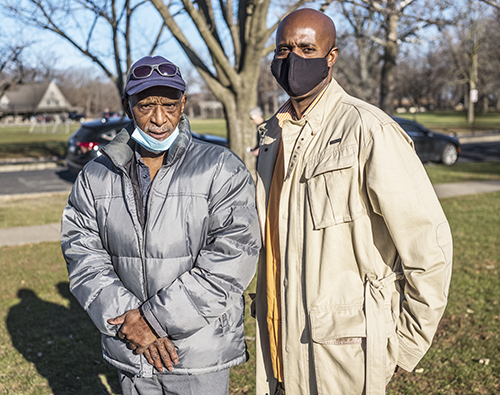 Lester Mason and his nephew Darrell Jackson stand together at Glen Oak Park on a sunny afternoon days after Mason was released from nearly 40 years in prison. (PHOTO BY DAVID ZALAZNIK FOR COMMUNITY WORD)