END_OF_DOCUMENT_TOKEN_TO_BE_REPLACED

For anyone who lives for the delicate splendor of flowers, winter can seem like a bleak landscape. A period of stillness before the spring breaks across the landscape with blooming things. However, if you pay attention to the winter landscape, you can find some things on this earth that are just as beautiful and ephemeral as the rarest of flowers.

In early December, I was driving along a roadway in Southern Illinois. In the roadside ditch, I was seeing several white, cottony things “blooming” amongst the base of old plants that had gone dormant for the season. After finding a place to safely pull over, I got out to investigate. The “blooms” were actually made of ice and are known as Frost Flowers. They are obviously not plants, but they owe their existence to plants. 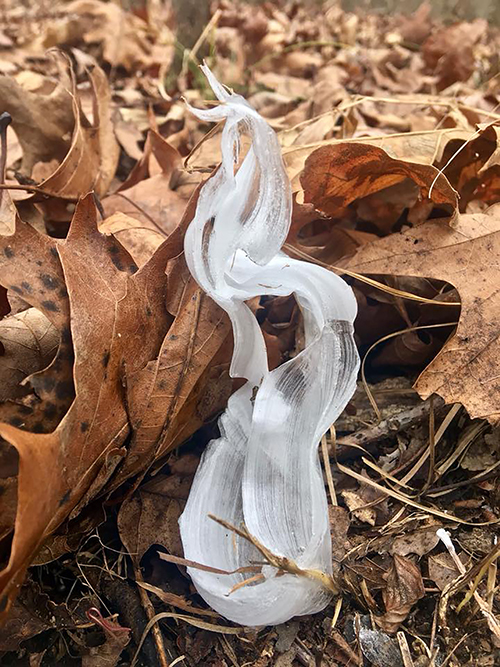 Frost Flowers form at the time of year when ground temperatures are still warm enough for root systems to still be active, and the air temperatures are cold enough to freeze water. The meteorological phenomenon that lends to the formations of Frost Flowers is more frequent in latitudes a little south of here, in Southern Illinois, but we occasionally see them in our region of Central Illinois. In the fall, ground temperatures can still be warm enough to allow root systems to be active and push water up into the stems of plants. If the air temperature is cold enough, the vascular tissues of the plant stems are frozen and rupture, and the water is forced out of the plant and freezes in the air. As more water pushes up from the roots, the frost flower “grows.”

There are a few species of plants that seem to be associated with the formation of frost flowers. One of them is called Frost Weed (Verbesina virginica). Its name is not a coincidence. Whoever named the plant must have been studying the frosty formations in late fall.

Ice and frost can change the winter landscape in beautiful and diverse ways. This year we experienced a two-week period in early January that gave us a variety of icy and frosty conditions. We all marveled at the winter wonderland of ice and snow that clung to the trees and covered the landscape. While the weather was cloudy, and somewhat gloomy, the conditions were ripe for other types of frost formations.

Cold nights, high humidity, and still air all combined to give the morning hiker a great view of hoar frost (freezing dew) and rime frost (freezing fog). These were especially evident in open areas. Each morning walk along a prairie brought a different view of newly shaped ice crystals. These crystals can be as unique as individual snowflakes. Slight changes in the variables of temperature, humidity, and air flow can change the shape of the ice crystals that greet the morning hiker.

It won’t be long and we will be walking through fields of wildflowers in bloom. Until that time, we can all experience the subtleties that the late winter landscape brings us. To paraphrase (and twist) a famous Willa Cather quote –– Anyone can love springtime, but it takes a soul to love February.

← Inland Art | Story Stitchers
Real Talk | This is who we are →